Hello Cboats friends, please help a friend of mine.
He has a place on a Grand Canyon trip end of October 2014 and needs a suitable canoe to borrow or rent. The outfitter has offered him an Ovation but I can't see this being an ideal canoe for the trip. I am thinking Outrage, Vertige, XL13, Rival.
Many thanks in advance for any help
James
www.jamesweir.net
Top

Was thinking that this guy used an Ovation, but I could be wrong. Anybody remember what it was?
Top

Man, I would not want to run the Grand in an open canoe, even with lots of air bags, and fully loaded to boot. I ran it in a C-1 (almost 50 years ago) with raft support so it was an unloaded boat. Lots of fun that way.
John R. Sweet, Mustoe, VA
Top

I have not done it...but my friend the legendary Jim Michaud has several times and maybe he will chime in here. I think your instincts are right: longer and faster. Bob Foote designs like Rival or Genesis would work as would many other long boats. I would go with the Outrage.
Top

When I was in the Moenkopi warehouse before our last trip in November, they had a Whitesell available for rent.

I think Jim traded out his whitesell for a Hahn.
Proud Yankee
Top

The boat at Moenkopi is as far as I know a not the same boat that Jim Michaud has or had stored in Flagstaff.

Tony is correct. I use to keep a Whitesell in Flagstaff but I've since swapped it out for a Hahn. If you have a choice of open boats to use I would suggest that you use something with very soft chines. Some of the eddy fences can be very strong and violent. Soft chines will help in keeping you upright. The Whitesell was the best open canoe that I've used on the Grand. the next best was the Outrage or Outrage-X.
Top

The Whitesell at Moenkopi is a different one from Jim's then. Rental is $15/day according to their website:
http://www.moenkopiriverworks.com/outfi ... entals.php" onclick="window.open(this.href);return false;

Just for interest's sake, and arcane history, pictures of my "Big Boy". Bob Connolly designed the original for his trip down the Grand Canyon. 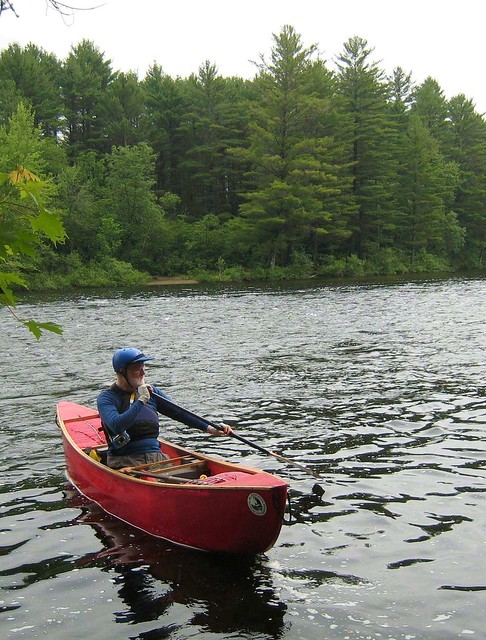 Remember that I'm very tall in the saddle. Blows around a bit. Of course, with gear on board it would sit lower. Soft chines, well-behaved, said to be like a deeper Defiant (17") with some detail hull improvements. 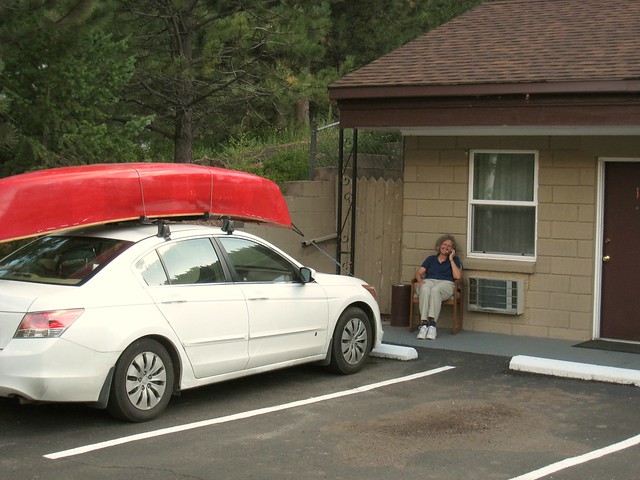 Yes, a Millbrook. Might be only three Big Boys in existence, because Kaz had trouble with the mold seeping and took it off the Millbrook offerings. So now I refer to mine as the Edsel.

Not sure why one would need such a light boat in the Canyon, though perhaps a few portages might be in order. I would take a c-1, maybe have Class 5 make me a Magnet.
Top

I wasn't familiar with the Ovation so I went and read a few old C-Boat post about the Ovation. After reading the posts I wouldn't hesitate about paddling an Ovation down the Grand. Speed is not a problem because you have to travel along with the rafts and the rafts mostly just float along with the current. The soft chines on the Ovation are a plus for stability. Since the boat is only 11 feet long the air bags will take up a bigger percentage of the space inside to boat therefore keeping the boat dryer.
Top

Ive been able to run it 4 times in various OC1s , Sunburst, Madriver Howler, Whitesell, etc. If you can find one the best overall would be a Dagger Encore i think. Enough speed for the flat sections,
but cuts across diagonals well too.
Top

Hi Folks,
For what it's worth, I took a Bell Nexus down the Grand Canyon on a solo self-supported trip, launched late October 2012. Good boat for the trip, plenty of volume to strap gear to the bottom of the boat, airbags superinflated above the gear, decked with 3 solar panels to recharge my electric bilge pump batteries. Get yourself an electric bilge pump, it will save your shoulders from hand-pumping all those tons of water you will take on. Pulling to shore and dumping out is not a realisitc option, and often simply impossible.

The Nexus is 14'4", soft-chined, about 4" rocker. I had a Dagger Genesis years ago that would make an excellent Grand Canyon boat, very much like the Nexus. I also have a Dagger Rival that's been down the Grand twice by a previous owner, on raft-supported trips. I'd take that boat, too, though it's a bit shorter. What you want is a good Class III river tripper. Soft chined, good volume, decent rocker, and long enough that it will track some on flat water.

An Ovation was my first playboat. Loved that boat. LOVED it. Played all over Colorado in it, and tripped out of it for as much a 3 weeks at a time on DesoGrey, the San Juan, upper Colorado, the Escalante, others. But I would NOT take it down the Grand Canyon. It has a great soft-hard double chine, but it is too short, too hard to track. I've got an Ocoee that would be even worse because of its very hard chine. A hard chine will put you in the water fast.

My current favorite playboat is an Outrage. It would be a decent choice on a raft-supported trip, with its soft chine and longer length, as would an Outrage-X. I'm not sure how the assymetric rocker will handle the eddy fences though; it's built for steeper water.

This was my biggest paddling surprise of the trip: It's the eddy fences that make life hard on the small boat paddler. Getting through the chaos at the bottom and outwash is vastly harder than actually running most of the rapids. The drops themselves are all pretty straightforward -- pick your line and go, it's just Class III+, but it's dam big Class III+. Once you're used to the scale, actually running the rapids is easy enough. It's the chaos at the bottom that causes most of the trouble.

A raft is big enough to just cruise right over the cross-currents and spin through the eddies, but a canoe, whoa -- you will use every bit of your side-surfing skills to get through them. If you don't have good side-surfing skills now, get some practice in. Rafts will cruise right past you while you are engaged in a death fight with an eddy fence that will not let you go, and that spits man-sized whirlpools past you that would take you right down if you fell into them. There are hundreds and hundreds of eddy fences that will grab you and hold you in place and just do not want to let you go, as the rafters you were ahead of wave bye bye as they cruise on down the river.

Sometimes there are astounding cross-currents, too. Duckie Eater is one of the most notorious, and rafts don't even notice it. The river plows almost 90 degrees into a wall and about a fourth of it curls up and over and flows back uphill over the top of the river, actually flowing sideways uphill at you. It's the damnedest eddie fence I ever saw, an eddie turned vertical flowing uphill over the top of the rest of the river. Put your paddle into that and try to stay upright! It happens at the bottom of Dubendorf and a few other places, as if the top foot of water were flowing sideways uphill across the rest of the river. This is where a hard chine will kill you!