by Sir Adam
A Slasher was one of my first two boats. A friend of mine sold me his cascade... and gave me his slasher. He was not a fan of the boat to say the least. On paper it sounds good - a plastic slalom boat. And if you are the right weight, and don't mind a heavy boat, it IS a nice fast boat. But I know many of us have tales of the rear upper deck edge catching and being flipped. At least it is an easy boat to roll! I also know of several "smashers" where the stern (and sometimes bow) have their walls removed, they've been heated, and crushed to reduce the volume a bit.

I actually had 2 Slasher's for a bit - one had been owned by a camp for delinquent kids, and rather than the "Slasher" it was the "Sashe" as I recall;)

by PAC
First off - the site needs better photos... even if of the slasher....

Known many to have cracked over time - old age not kind to that plastic.

by madmike
Not a fan.

by ezwater
PAC, small cockpit? I thought the cockpit rim was larger than usual. You mean the cockpit inside was small?

I have a Zealot, and I'm heavy, but I've never ever had a problem with water climbing on the rear deck. Must be some subtlety of design. In my opinion, by the '96 Olympics, designers and builders had gotten a lot of the bugs out of slalom designs in terms of handling heavy water.

by Jim
Sooo many memories, and some of them are good.

Mine still gets use because it is easy on my shoulders in the spring when I am working on getting in shape, or for windy days when the OC would act like a sail.

by RodeoClown
I awoke one monday morning at the put in for the Gauley after Gauley fest weekend and decided since it was Gauley race day, I'd race the fastest boat i could borrow in the parking lot. Will Lyons had two Slashers he bought (or maybe was given?) for the saddles. As I was carrying it through the parking lot, someone asked "didn't Corran design that thing?" I don't think he did, but that should have clued me in to the fact that this was a bad idea. The low point came when I flipped a third of the way down Pillow, had to push myself out of the room of doom with my paddle (while still upside down), and somehow managed to roll up at the bottom to a lot of cheers, and nearly vomited from lack of air... then took off racing again. Somehow I made it through the race without swimming, and only drew blood in the run out after the race below sweets.

I haven't paddled a Slasher since then, and haven't felt the need to.

by valhallalongboats
I've always wanted to try a Slasher!

Reading these posts have cured me of the urge....

by clt_capt
I only paddled one a few times in Citizen's races - my regular boat those days was a batmax - so the slasher was a heavy plastic pig that had edges good enough to flip you, but not really responsive like a real slalom boat.

by Stingray
I heard about the Slasher, saw one on the bank where we were partying, thought it looked pretty good, went over to pick it up and turn it over, it was so heavy decide I never wanted to paddle it, so I haven't.

by sbroam
I loved them til I didn't - I went through two (still have the first, it is chopped and welded and could be a light paddlers short squirt boat.) I think what made it work for me was that I was way at the top of the weight range and started out with one that was crushed - I just flat out embraced the top edge. I learned to surf, stern squirt and roll. 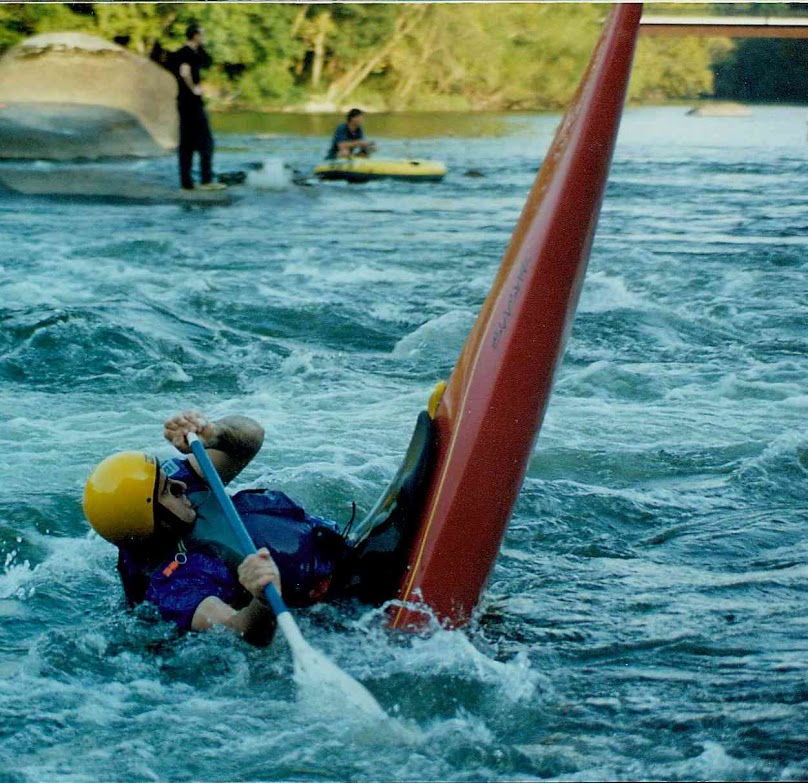 by PAC
LOL Scott! The resolution on the web site sux ... now that I see the true you! I'm impressed!

One of the few boats MY body just did not like...

by Silent Bob
Geez! so little love for the Slasher...

by Berkshire Jack
The Slasher was the 4th C1 I owned. When it came out, there was a fairly large contingent of C 1’ers here in Western Mass and myself and 5 other friends bought them. We all generally enjoyed them - at least for a time. Appreciating their speed, good outfitting, and ease of rolling, compared to the Gyramax. We were all younger, stronger, had faster reaction times, and less brains at the time and the boat served us well. We took it down the Dryway, the Cold, the Tewksbury. I ran some the hardest creeks of my life in that boat (none were really that hard), but with that pointy bow, it proved how little mature grey matter I possessed. You needed fast reaction times to keep the edges from catching. It was my go-to boat for about 6 years. When I bring it out on occasion now, I find myself catching edges all too often. Wouldn’t dare use it on a shallow creek again.

by sbroam
I always heard it called the "Trasher"... To remove volume was a pretty easy project, maybe an hour - the worst part was getting pedestal out. I cut about 2" off the top of the rear wall,smeared it with Goop, and parked the truck on it (with a 2x6). Voila. When I sold it, it took about as long - used a thin board to break the glue loose on the top and slid the foam I'd kept back in. It was a plastic, not-so-smooth Viper C-1 for me...

by canotrouge
here you go for the fans....http://www.mec.ca/Apps/outdoorGearSwap/ ... _cd=Canoes" onclick="window.open(this.href);return false;
not my boat....
All times are UTC
Page 1 of 2